Rover Spy Tank is a remote-controlled Wi-Fi robot and its routes can be pre-programmed. To cap it all, he also has a camera with night vision on board. With its design and black and green colour, the Rover Spy Tank looks like it is coming from the future. His equipment is also a bit like it.

With the included free application for iPhone, iPod touch and iPad, you can take photos and forward them directly with the camera in the Spy Tank. You can also control the device through the camera that transfers its images directly to the app. Driving at night? No problem; an infrared night vision will provide visibility. And with the built-in microphone, there's no need to miss out on forbidden calls.

Unfortunately, despite the Wi-Fi connection, the Robot Spy Tank cannot be operated over long distances. In the open air and in large spaces you can reach up to 60 meters, but if there are walls in between, the range is quickly halved. In terms of batteries, the Spy Tank is a bit behind schedule. There are no less than 6 AA batteries going in. You can control it with the arrows on the screen or by using the iPhone or iPad as a handlebar.

All ratings for Rover Spy Tank 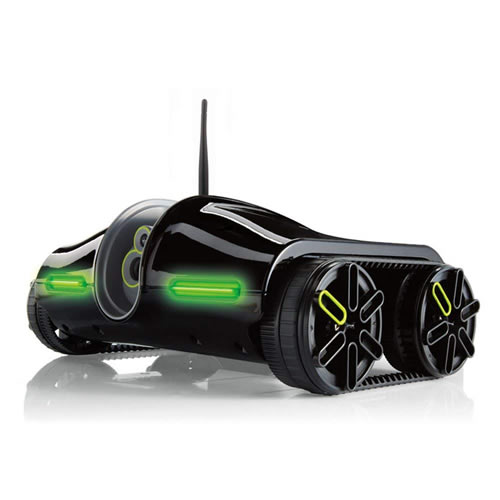