PAL Robotics announced last month its TIAGo++, a robot that includes two arms with seven degrees of freedom each. TIAGo is used in diverse European-funded projects where end users from different sectors, from healthcare to industry, are involved.

This allows them to learn from their feedback and keep finding new ways in which the platform could be of help in a user-centered way. That’s how we knew that adding a second arm into the TIAGo portfolio of its modular possibilities could be of help to the robotics community.

TIAGo++ can reach the floor and up to 175 cm  high with each arm, thanks to the combination of its 7 seven degrees of freedom arms and its lifting torso. The maximum extension of each arm is 92cm. This workspace allows TIAGo to work in several environments like domestic, healthcare, and industry.

The new TIAGo is based on the Robot Operating System (ROS) and can be expanded with additional sensors and end effectors. TIAGo++ is intended to enable engineers to create applications that include a touchscreen interface for human-robot interaction (HRI) and require simultaneous perception, bilateral manipulation, mobility, and artificial intelligence.

All ratings for TIAGo service robot ready for two-armed tasks 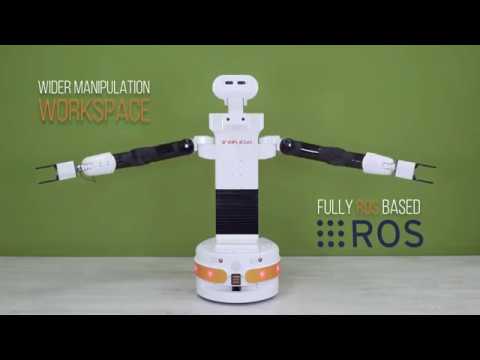 TIAGo++, the service robot with 2 arms

PAL Robotics announce a new TIAGo with two arms, the robot you need for bi-manual tasks