The BeamPro 2 has a number of improvements over the first BeamPro, including a 24 inch LCD touch display and two "super-wide" 12-megapixel HD cameras with 12x digital zoom. The robot also comes with 3D depth sensors, ambient light sensors (to automatically adjust the brightness of the screen) and three loudspeakers that can reproduce "lifelike sound. The first version of the Beampro is already calling because of its good sound.

The central display can be raised and lowered with a 10-inch range. There is also one particularly handy additional option, obstacle detection sensors. Combined with the ability of the six-wheeled robot to rotate in place, they allow the BeamPro 2 to be manoeuvred with a little more agility. The company says that this makes it much better for the telepresence robot in busy areas such as hospitals, nursing homes, museums and classrooms".

The BeamPro 2 is likely to remain a high-end device for stage perfomances and busy, noisy environments. Availability will be spoiled in the summer of 2018.

All ratings for BeamPro 2 telepresence robot 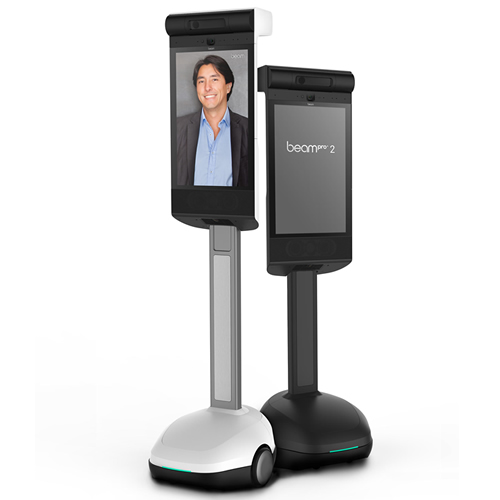