Made in China 2025' is the name of the strategic program that is supposed to cause the robot revolution, among other things. In 2013, there were 25 robots per 10,000 employees in China. Three years later, there were already 68 robots. In South Korea, Singapore, Germany and the United States the numbers of robots are many times higher, but the growth in China is going fast.

The world's workshop, China, is changing

One in three robots in the world does this in China.
Where once thousands of people sat on conveyor belts, now machines and robots do the work. 24 hours a day. Driven by fewer and fewer people. Every new factory is characterized by more and more automation and more robots that replace human hands. "We want to deploy people in an intelligent way,".

In recent years, wages in China have risen sharply. In 2016, a factory worker cost an average of $3.60 per hour. That is much less than an employee in a developed country, but already five times more than a worker in India costs. Because of the many years of one child policy there are also fewer and fewer people on the labour market. It is expected that by 2050 some 200 million people will be less available to work. There is therefore a great need to earn more money with fewer people. 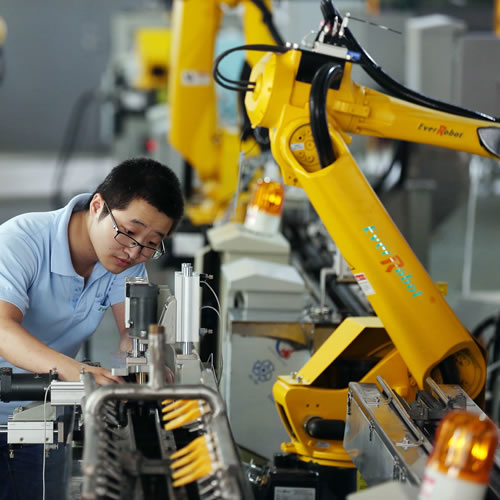