A team of researchers and engineers from Gaumard Scientific have developed a robot that provides a more realistic situation for medical training. The robot, called HAL, looks like a boy and also behaves like a boy. He can follow a finger with his eyes, answer questions, cry for his mother and experience anaphylactic shock.

The robot is designed to allow trainee doctors and nurses to perform a wide range of tests, including blood pressure measurement, wrist monitoring and respiratory monitoring.  Trainees can also use real medical equipment, such as an ECG machine or a heart or blood pressure monitor - or tools such as a scalpel or breathing tubes - to carry out realistic medical procedures.

Gaumard has a long history of producing medical training equipment. With the HAL robot, the company has set the bar higher than ever before, offering medical students a new level of interaction with a robot patient. When students perform the treatment, the robot can react, cry, for example, or say "au" when it is pricked with a needle. It can also move, not only by showing emotions, but also by imitating the actions often found in the treatment of a person in pain.

Trainers can also speak into a microphone and make their voice from the robot sound like a five year old boy, and they can also make medical emergencies

Robots for the hospital
Robots in education

All ratings for Humanoid robots for patient simulation in medical training

Robots for the hospital
Robots in education 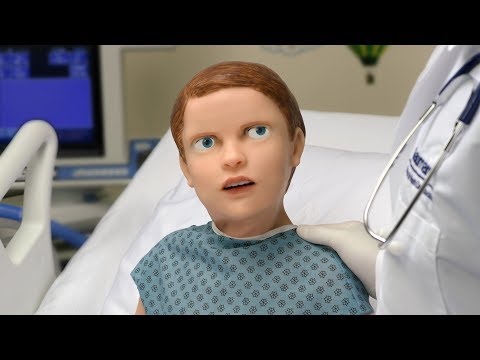 Meet Pediatric HAL, an advanced pediatric patient simulator and the first capable of simulating lifelike emotions through dynamic facial expressions, movement, and speech. HAL is designed to help health care students and professionals of all levels develop the specialized skills