Sophia has a female face, including facial expressions, and looks at her stage partner and audience. Her human form often creates a false image among people of the current state of artificial intelligence and the ability of a robot to conduct a human conversation.

David Chen, of Hanson robotics "Human psychology is wonderful, he notices. How people see Sophia is often the result of their imagination. And that is not always reality. The maker of robot sophia makes no secret of Sophia's shortcomings. And it is known that a stage performance does go according to a script.

In earlier perfomances of Robot Sophia the question was asked why we humans give robots a human shape. Because this encourages interaction and contributes to trust. The robot reacts more physically in a way we are used to. In the build-up to a better human-machine interaction you could say that this is positive. However, a realistic picture about the artificial intelligence that is possible today fits in with this. 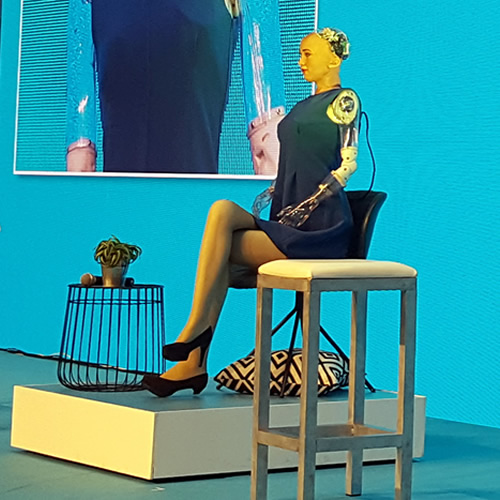