Dubai doesn't shy away from modern technology. For example, the fire brigade has water jet packs to fight fires from the air and the police in Lamborghini drive with crime prevention software. Now the next step is taken: robocops.

The Dubai police recently started using the human-like REEM robot, developed by the Spanish company Pal Robotics. However, this RoboCop is less spectacular than the cyborg from the science fiction film of the same name. REEM does not take to the streets heavily armed to track down and eliminate criminals. This robot helps citizens to file a report, pay fines and provide general information.

REEM is 1.65 m long, weighs 100 kg and stands on a platform that reaches a speed of up to 5 km/h. On the back of this platform there is space to carry luggage of up to 30 kg and each of the two hands of the robot can lift objects of up to 1 kg.

REEM is equipped as standard with a navigation system for autonomous navigation, a touch screen and behind the 'eyes' cameras with facial recognition. The cameras can also send live video to the control room.

Quarter of the corps
The first police robots are deployed in Dubai in shopping centres and tourist locations. After that, they will also sit behind the desks of police stations. The ultimate goal of the Dubai police is a robotic policeman who can do the same as a meat and blood agent.

A first prototype of a mobile police robot will be introduced in 2020. By 2030, a quarter of the police force should be robotic and police stations should be fully robotic.

Dubai gets robocops can be found in the following categories 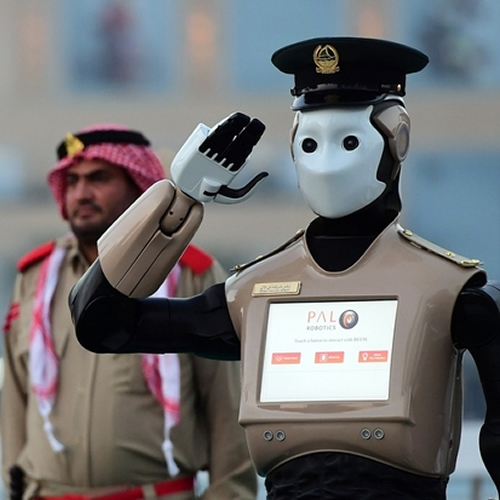